Men. Am I right or am I right. 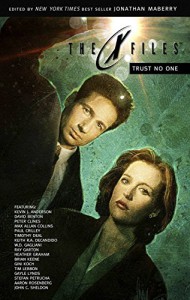 Random thoughts I had while listening to this book:

4. You know what, dear author, some of us watched the show because of Scully. Some of us tolerated Mulder because she tolerated him.

5. I have no memory of what happened half an hour ago, which is to say I've forgotten how this story started.

7. I can't remember Scully being this...passive-irrelevant-helpless in the show. Either my memory is playing tricks on me or Man, they really don't know how to write women.

8. HA! Of course I already hate one of the two women authors in this anthology. *sobs*

9. Holy fucking Islamphobic implosion! There wasn't any need for that shit here.

11. This first person voice story from Scully's point of view was, naturally, written by a man.

12. I started out resenting the male narrator but he's doing his part carrying me through to the end of this book.

13. Is this a man's idea of ending the anthology on a romantic titillating note?